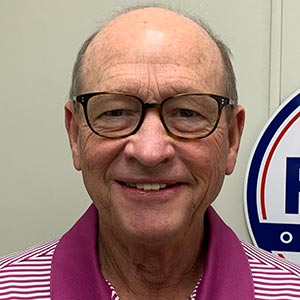 John Fair is a past President of the PURE Oil Jobbers Cooperative, Inc. John rejoined the PURE Co-op Board in 2016, representing District 1, after serving the Co-op in this capacity previously. John held two consecutive terms on the Board when the Co-op first formed 25 years ago.

Professionally, John is Vice President of Fair Oil Company in Louisville, Mississippi. At Fair Oil Company, John markets in all areas of Mississippi, selling Marathon branded and unbranded gasoline and diesel to customers. Fair Oil Company purchases product from PURE and other major independents, operating several company-owned stores while leasing others. In addition, Fair has a number of dealer locations that he sells to through consignment or other contracts. The company also has a fleet of trucks that carries products, in some instances wholesale by transport only.

After graduating with a B.S. in Electrical Engineering from Mississippi State University, John served six years in the U.S. Navy. He and his wife have four children and six grandchildren. His father started Fair Oil Company in 1934, and his son Johnny, a former PURE Board Member himself, is the current President of the company, making it a third generation family-owned and operated business.

Get up-to-date news and information from PURE Oil